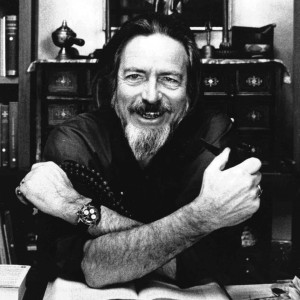 “We seldom realize, for example that our most private thoughts and emotions are not actually our own. For we think in terms of languages and images which we did not invent, but which were given to us by our society.”

Alan Watts was a well known British philosopher, known for popularizing Zen Buddhism and Eastern philosophy in the West. He played (and still plays) an essential role in integrating Eastern and Western thought.

He was born January 6, 1915, and received a master’s degree in theology from Seabury-Western Theological Seminary, and received popularity through giving inspirational lectures on a San Francisco radio station. He was interested in process philosophy, history, psychology, wisdom, mysticism, and the relationship between Eastern and Western thought. He taught comparative philosophy and psychology at the American Academy of Asian Studies (now the California Institute of Integral Studies), but later retired to writing and speaking.

He authored over 25 books such as “The Way of Zen,” “The Wisdom of Insecurity,” “The Joyous Cosmology,” and “Psychotherapy East and West.” He believed in the perennial philosophy—the idea that there is a common mystical core underlying all major religions. He also believed in awakening the human being through higher consciousness. He was married three times, had seven children, and died in 1973.  Today, his work is still enormously popular in the wisdom seeking world. His books and talks attract and inspire new wisdom seekers every day.

Why Should You Care?

Alan Watts’ lectures and books help people see themselves, not as a “skin-encapsulated ego,” but as an essential interconnected part of the universe. His inspiring talks enlarge and energize the mind, and help us get rid of fear and anxiety.

Check out some never before released recordings here: http://www.betterlisten.com/collections/watts