How The Soul is Sold – NY Times article excerpt

How The Soul is Sold – NY Times article excerpt 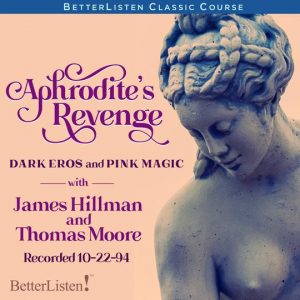 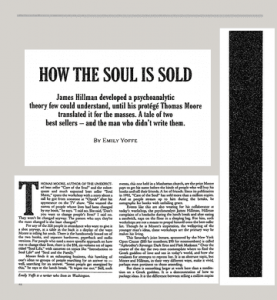 This week we published an amazing new recording from our archives featuring James Hillman and Thomas Moore. The original recording was made in 1994.

“Thomas Moore, author of the unexpected bestseller “Care of the Soul” and the subsequent and much-expected best-seller “Soul Mates,” opens the workshop with a story about a call he got from someone at “Oprah” after his appearance on the TV show. “She wanted the names of people whose lives had been changed by my book,” he says. “I said no. She said, ‘Don’t you want to change people’s lives?’ I said no. They won’t be changed anyway. The person who says they’re the most changed is the least changed.”

What was breaking through was that he no longer could accept what he saw as the smug assumption that he, or anyone else, could cure people. He also believed that since Jung’s death in 1961 his disciples had stopped thinking for themselves and were turning Jung’s work into a religion. Hillman’s answer to his crisis was an old one. It was the guiding principle behind the Renaissance and the Romantics: a return to Greece. As with all things Hillman, not a literal return but a return of the imagination. He began a serious study of Greek mythology and found in those endlessly strange, profoundly imaginative stories, a way to reconnect to psychology.

Jung too was intrigued by polytheism, but for Hillman, it became the organizing principle of the psyche. In a real break from Jung, he turned away from what was the accepted essence of mental health: a wholeness of the personality, individuation. Instead, he wanted to take the heroic self off its pedestal. As Moore explains in “A Blue Fire,” “Hillman’s psychological polytheism does not portray a life of chaos but one of many elements rising and falling . . . ” Hillman calls the school he founded (though he rejects the word founder as too heroic) archetypal psychology.

You can find the full article here.

You can listen to free previews of the recording here.